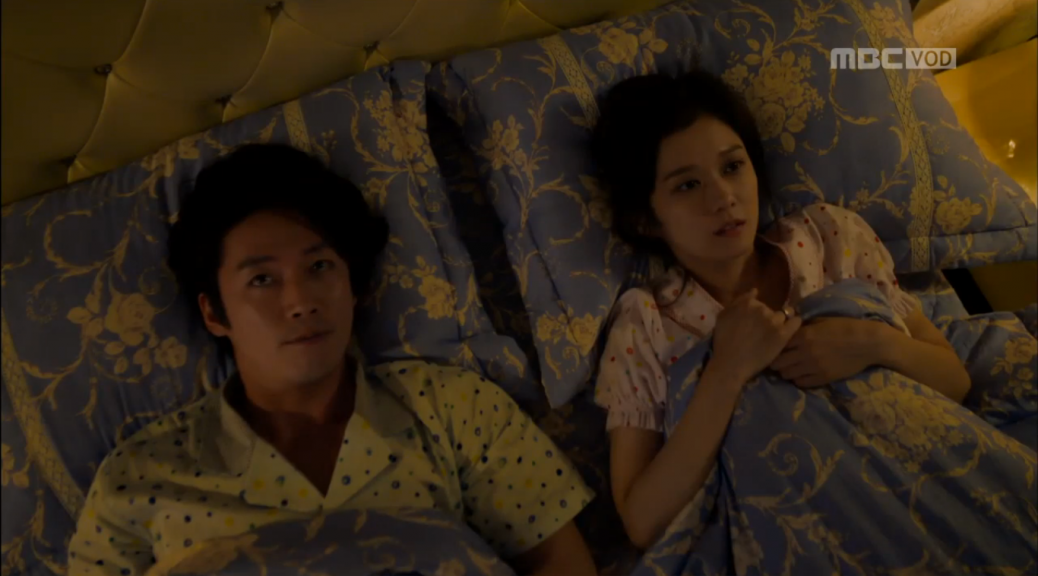 Last episode left us with unexplained emotions starting to well up in our leading couple as well as  an intense staring contest between our leading men. Well brace yourselves dear readers, because this episode will have you *Squeeeing* your way through most, if not all, of it. Join Wendilynn and myself (firnlambe), as we watch Gun start to finally recognize the budding feelings that have started to grow deep down inside his heart and attempt to cope in the best way he knows how….

Daniel has, much to Mi Young’s confusion, started a subtle war with Gun in one swift hugging action. All while planting the notion that everyone is not as happy as Gun seems to believe they are.

Firnlambe: Score one for Daniel! Way to declare your “intentions”. It doesn’t matter if you’re only provoking Gun to see where his true intentions lie, the point is you are…and Gun doesn’t like it.

Wendilynn: Agreed.  Gun needs to be reminded that Mi Young is not disposable. 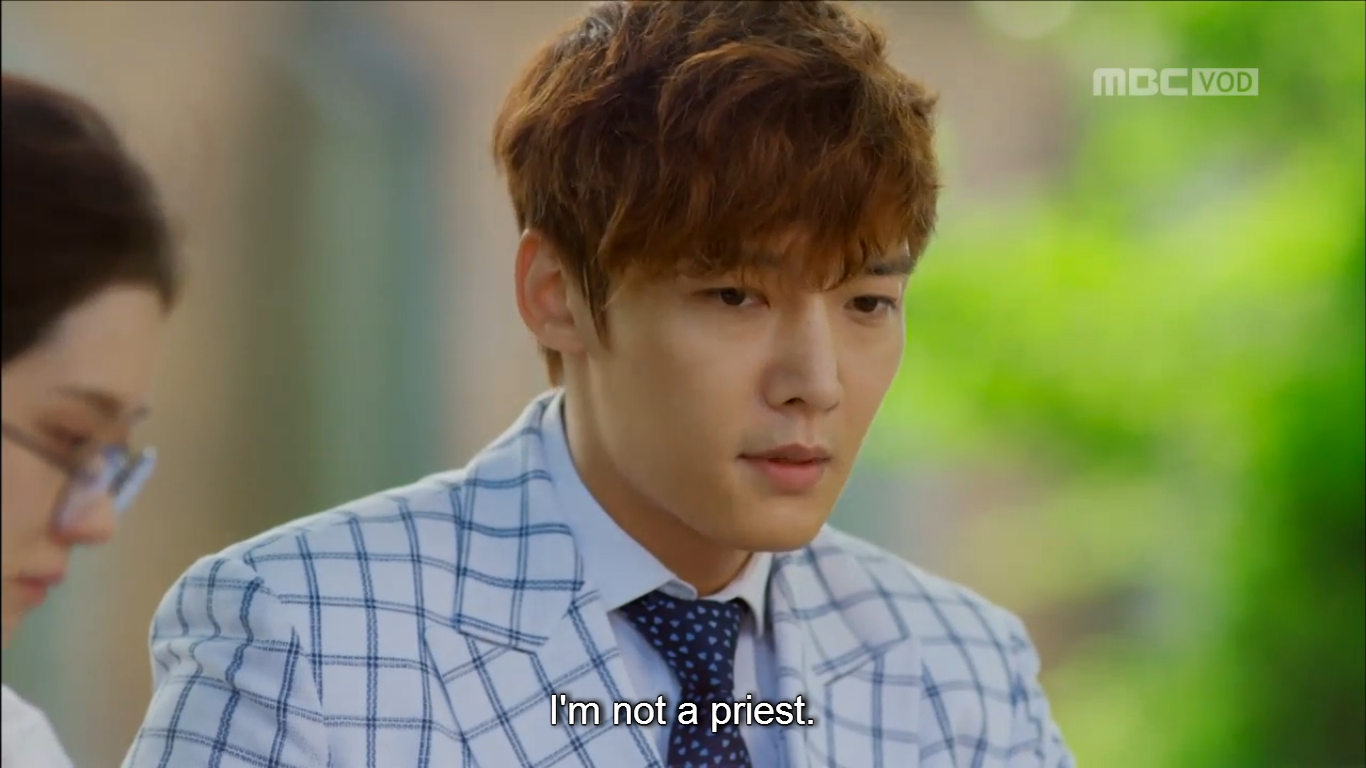 Unable to keep up the facade any longer, Daniel finally comes clean on his title as “priest”. He tries to reassure Mi Young that he was not lying to her on purpose–that every time they ran into each other she was in need of help in some way shape or form, so he always missed his chance to confess. Already overwhelmed from the news that her home is in danger of becoming a landfill, Mi Young just gets up and leaves.

Firnlambe: Well at least the cat’s outta the bag now. I’m glad things are now clear between them.

Wendilynn: Very.  Daniel was always there to help her when she needed it most.  She trusts him and that allows her to forgive him very quickly. Its not like Daniel was selling her home for a landfill or anything.

Still blissfully unaware that his ‘almost’ business plan has been leaked to Mi Young. Gun comes home with a giant box in an attempt to smooth things over and cheer up our Snail by means of feeding her sweets.

Firnlambe: Can he just stop, seriously that smile..so adorable and then there’s the fact that he’s taken the habit of calling her our Snail. Ugh…This man has got it bad….this just goes to show how deeply Mi Young has crawled into his heart.

Wendilynn: I saw that big cake box and thought,  “too much sugar”.   My dad always got my mom her favorite candy bars when he knew he had made her mad and was trying to apologize. The hurt look on his face as she leaves their room was touching.  You can tell he doesn’t understand what is going on or why she packed her bags. 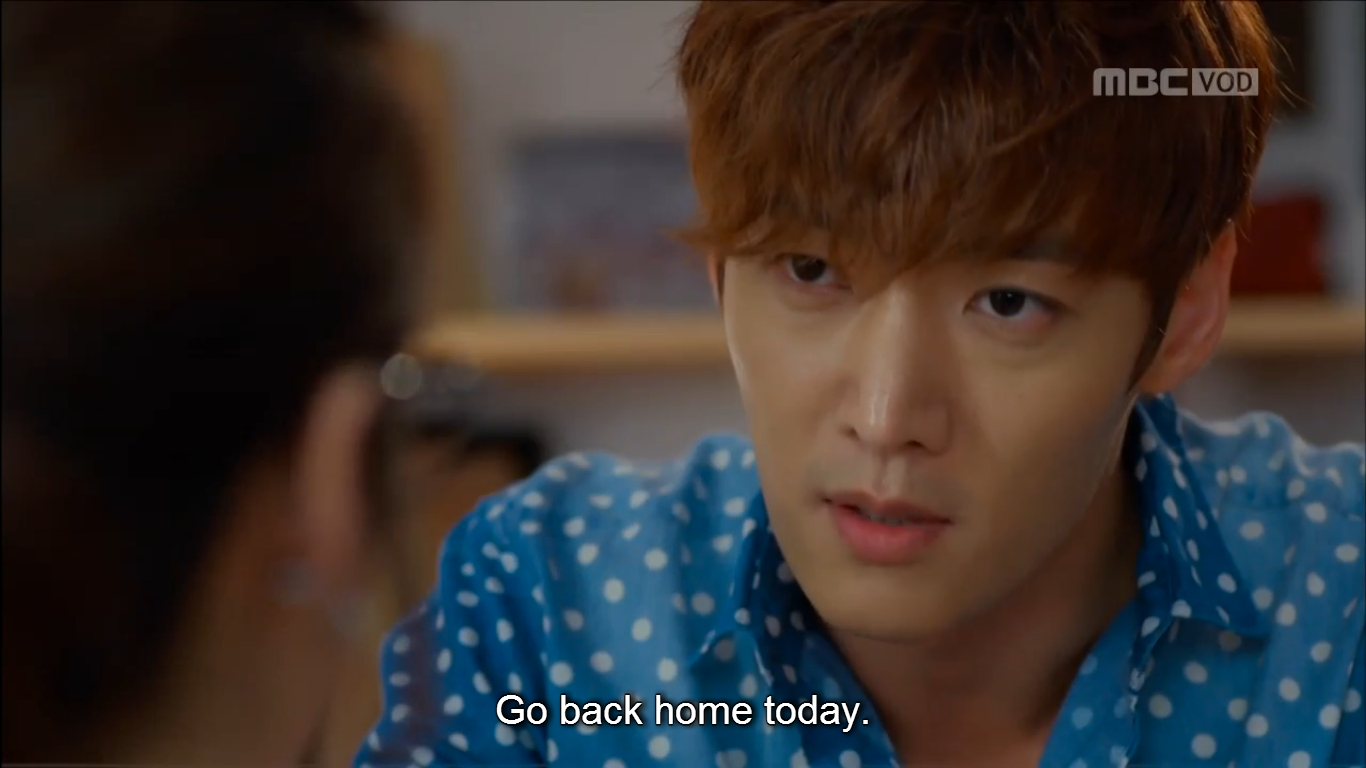 Their misunderstandings gone, Daniel tells Mi Young that he would like to be her neighborhood Oppa. His first Oppa gesture? Why sending her back home of course…Oppa has spoken!!!

Firnlambe: Ugh…..Daniel…..You sir, are the perfect Second Lead Syndrome catalyst. You look out for Mi Young, and yet you still have this air around you that leaves us slightly confused as to if you’ve taken a romantic interest in her or not.

Wendilynn:  I also have to wonder how much Daniel’s friendship with the Queen is at play here too.  He knows very well how important Mi Young’s child is to Grandma.  The fact still plays that Mi Young is married and Daniel won’t cross that line, completely, yet.  Mi Young is told about his younger sister and her compassionate heart also takes Daniel in. 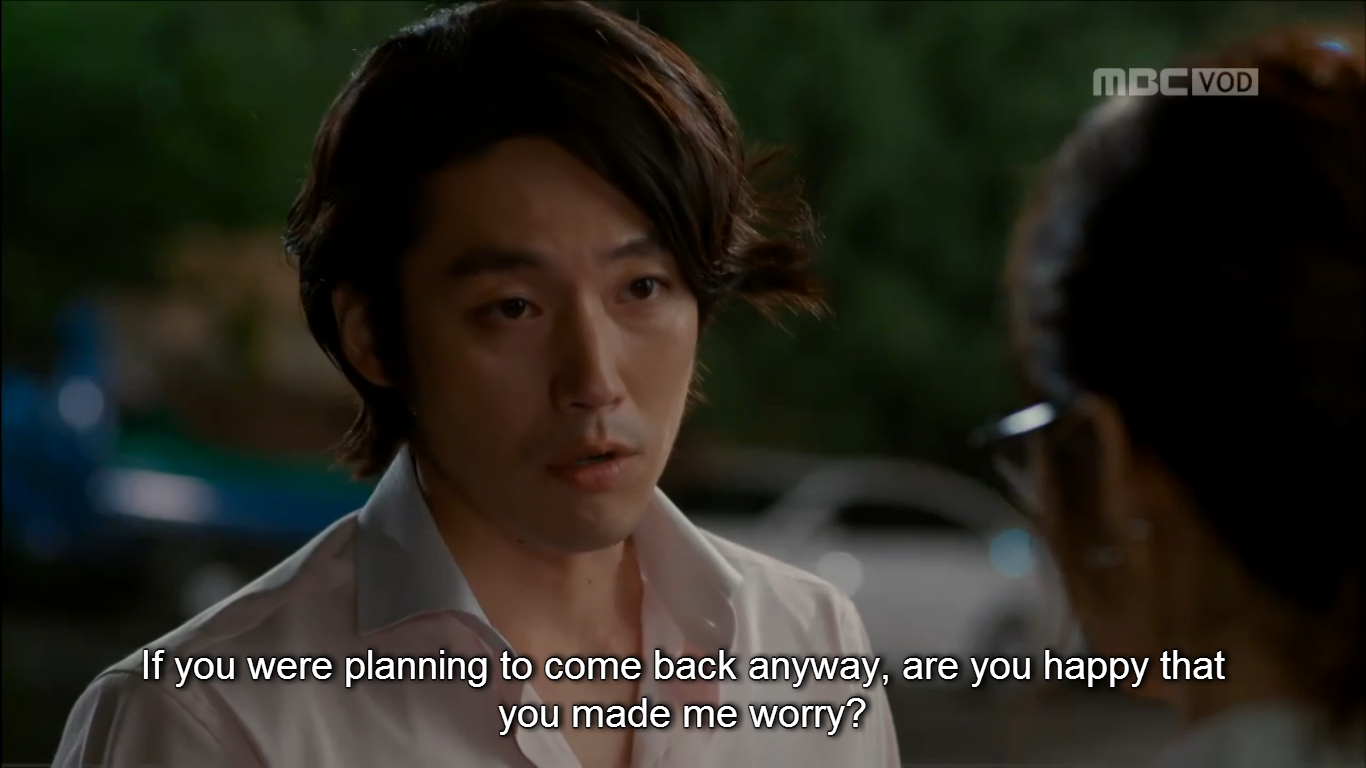 Heeding her new Oppa’s words, Mi Young decides to head home. At the door, she has one last moment of hesitation about going inside and she turns at the mention of her name. Gun, after having his own little worry session while waiting for Mi Young to call or text him, has  decided to wait for her outside.

Firnlambe: If I hadn’t already been convinced that Gun’s feeling had started to shift towards Mi Young, the whole worry session would have changed my mind in 5 seconds flat.

Wendilynn:  That worry session was cute.  He kept getting more and more upset that she wasn’t calling him.  Mi Young is also touched that he would get worried for her.  Up till now, she believed she was nothing to him.

Finally! It’s time to celebrate,  for the elusive D. Pitt has been tracked down and Director Tak is more than happy to deliver Gun  the good news…but his over the top enthusiasm does not sit well with our brooding leader.

Firnlambe: Oh my goodness…I really hope they keep utilizing this CGI effect. So damn funny, and waaaaaay better than the zipper motion the Taiwanese version used to silence the same character.

Wendilynn:  The freezer effect was funny.  And they did it well.  Even if Gun hadn’t been brooding, I think his secretary’s effervescent mood would have been too much. lol

D. Pitt has finally arrived…but lo and behold!! Gun is shocked to see it’s Mi Young’s “Priest”. Tensions rise as both men size each other up and give out their respective warnings to each other from across the round table.

Firnlambe: This versions Daniel certainly is coming out swinging at full force isn’t he?

Wendilynn:  He’s not playing games, that’s for sure.  He’s in full protect Mi Young mode. He also reminds Gun that he’s not treating Mi Young as his wife so shouldn’t get jealous when she makes other friends. Boy, does that not sit well with Gun.   I wonder how long it will take Gun to find out that he’s also Grandma’s special friend?  I have one bone to pick though, that orange jacket, Gun wears one almost the same one in another episode. Neither of them look good in it.  Orange is NOT their color.

Mama mistress’s plans have not been going the way she wants them to. In order to relive some of her pent up stress, she has her petty revenge when it’s revealed that both Mi Young AND Gun are showing signs of morning sickness whenever the refrigerator is opened.

Wendilynn:  actually, sympathy pains/morning sickness from Dads is a well documented fact. This is a little over the top, but not unheard of.  Funny bit of petty revenge though.  I have to admit, in her precarious shoes, I probably would have done the same thing.  LOL   She can’t really get in trouble for it.

When Mi Young’s Eonni and husband drop by for a visit, things really start getting interesting. After a quick cleaning session, we see our lead couple posing for pictures to send back to Mom. And while pictures and house tours are great, the suggestion of a double date is brought up…everyone looks excited at the idea, even Gun, but Mi Young’s taking no chances and claims Gun has to work.

Firnlambe: This poor man….just look at how dejected he becomes as soon as Mi Young cuts him off, claiming he’s much too busy with work to come with and that they shouldn’t bother him over such a trivial thing as a ferry ride. That look of crushed happiness is something you can’t fake. The more I look at this GIF the more my heart aches for him T^T

Wendilynn: I know what you mean. He really wanted to spend time with Mi Young and she just cut him off at the knees.

The air is clear between our leading couple as Gun is finally able to admit that he did not sell the factory, and just in time to. Eonni’s going into labor! There’s no time for fighting because she needs all the help she can get!

Firnlambe: Few things. 1. How did Gun magically know all of this baby birthing knowledge? Did he have some late night study sessions we were not privy to before getting on the ferry? 2. I’m glad they kept the husband the weak willed type who faints at the sight of blood. and finally 3. The facial expression on Eonni’s face during the last stretch of labor was priceless!

Wendilynn:  I have no problem believing that he had looked up birthing techniques in regards to his own baby.  He’s the sort of guy who would have done that.  Also, men tend to have a problem with feeling the pregnancy is real until they hold the baby or feel it moving.  This really helped solidify that Mi Young was pregnant with his child. 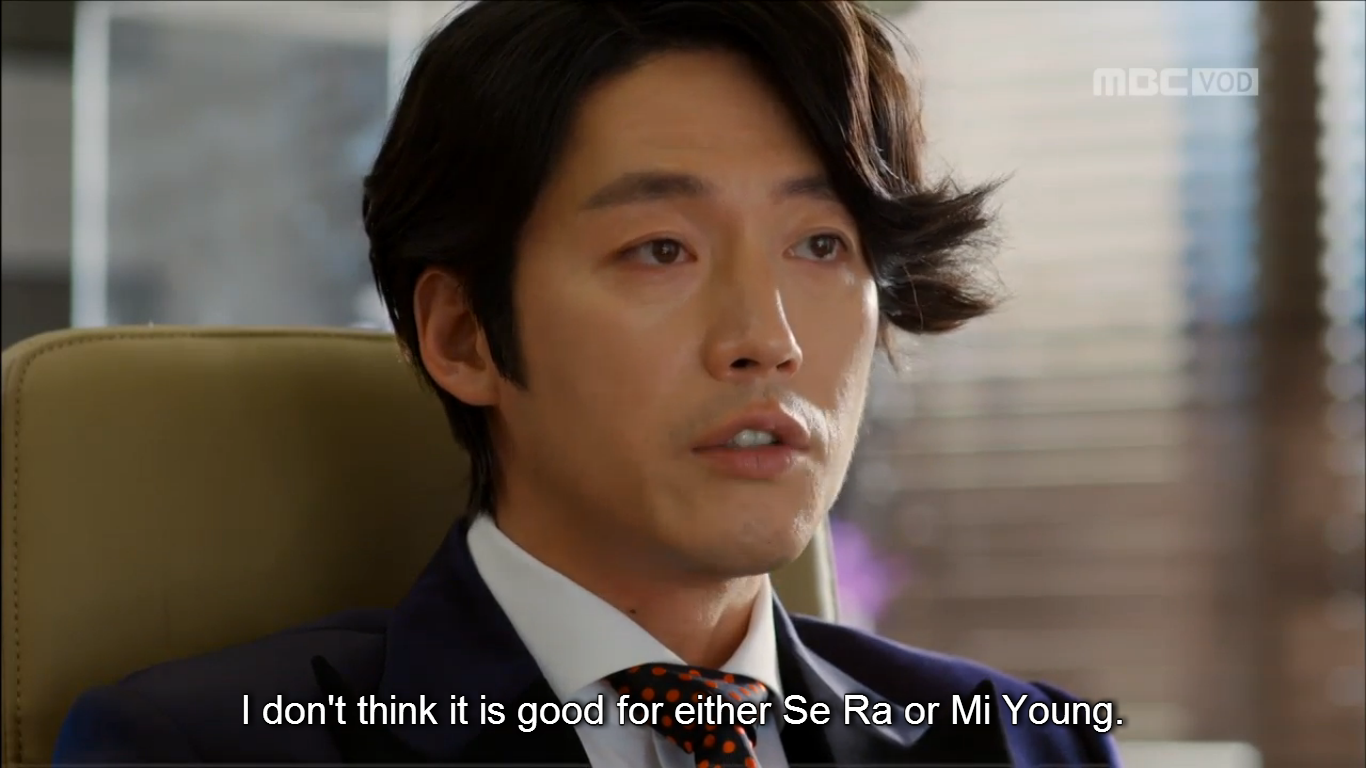 After a few choice text messages he received from Mi Young get him thinking, Gun finally musters up the courage to set in motion plans to find Se Ra and explain what’s happened since she’s been away

Firnlambe: About damn time! He’s had soooo many opportunities to let this spiteful woman know what’s been going on after she dumped him this last time.

Wendilynn:  Agreed.  Time to man up and cut her loose.  If he was capable of cutting her loose, which we know he’s not. 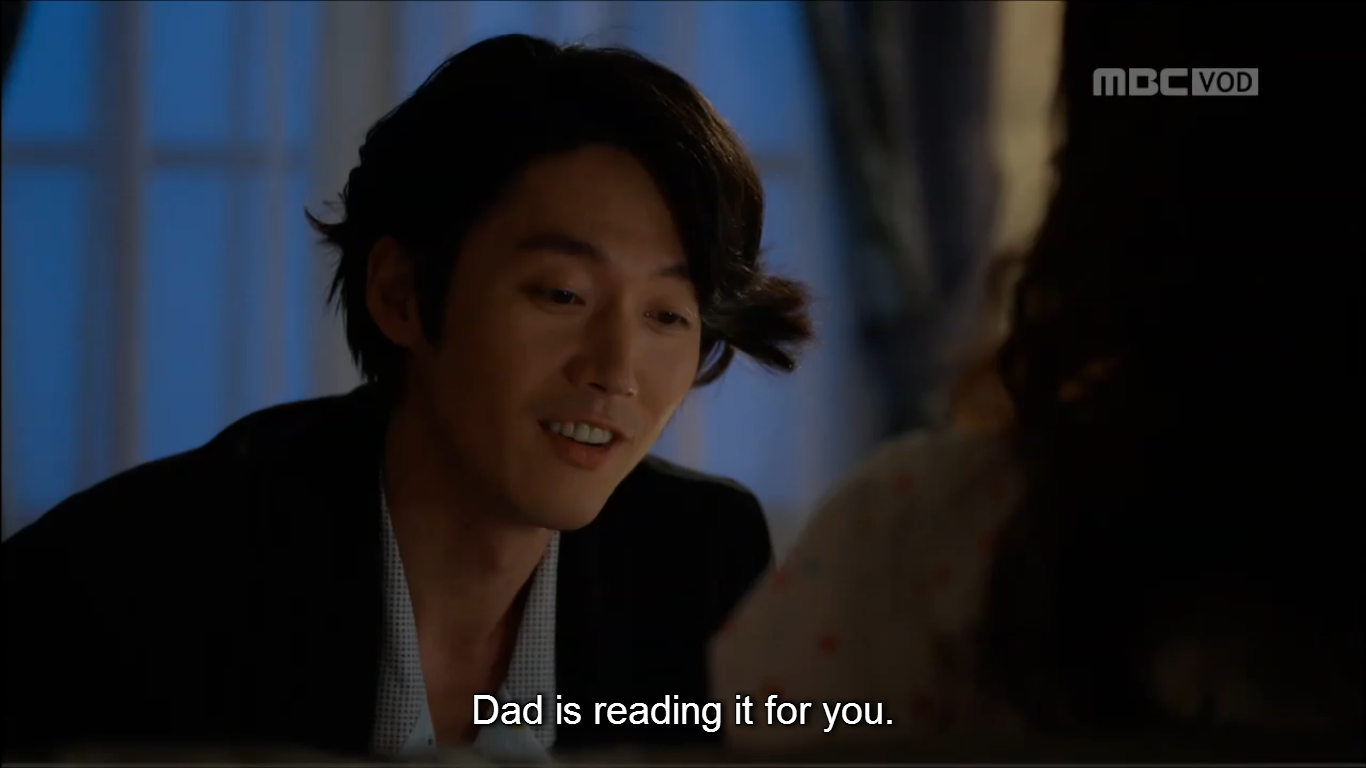 While stalking D. Pitt in his man-cave, Gun hears an extremely eerie, ghost like sound. After investigating the noise, we learn that, thankfully, it was only Mi Yong reading to baby Gun. Which is great because Papa Gun would have been a goner otherwise with only a toy Hulk to protect him. Instead of going back to sleep Gun stays and continues reading the story…..D’awwwww

Firnlambe: *Squeeeeeee* Oh Em Gee guys….this was so sweet that I quite possibly developed cavities while watching.

Wendilynn:  This was so adorable.  And he’s such an over the top story reader.  Jang Hyuk has two children in real life, I’m sure he was able to tap into that experience for this.

Firnlambe: You didn’t happen to go into research mode did you?

Wendilynn:  Me?  I just randomly found it after I found out he was a rapper as a young man and that the karaoke scene was an inside joke. lol

After story time, Gun decides to play a very dangerous game of chicken. It involves sleeping on the bed….together…..catch is, if one of them leaves and sleeps on the couch or the floor they admit to having feelings towards the opposite party. It starts out simple enough. Both Gun and Mi Young face away from each other in an attempt to settle down their hearts, but one wrong body twist has our leads looking at each other face to face. Mi Young tries to bail only to be pulled back.

Wendilynn:   This scene was hot.  Oh my gosh, I love how Kdramas play the sexual tension like Mozart on a piano.  I love these types of scenes.  The emotional  connection of the two characters is so thick you can cut it with a knife….and nothing happens.    I love it.

Everyone still alive?!? That episode definitely packed a whole lot of squishy moments into it didn’t it? Everything’s looking up for Gun and Mi Young, but how long will this growing happiness last? Does Gun do what each of us hopes he’ll do and kiss Mi Young? Or will our leading couple finally come clean about the true nature of their relationship? Let us know your thoughts about the episode and we’ll see you in episode 8.